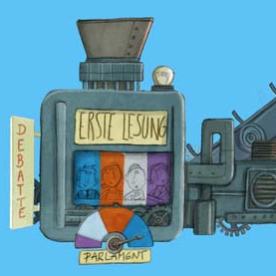 This is a project from 2011 I did for the Landtag Baden Württemberg for Taks Film and director Dorothea Künzel. The process was a little protracted, because I had participated in pitch the year before. In retrospect the design I did back then was a little to lame, so I lost to Angela Steffen, but got the job when she decided to work on Andreas Hykades Tom. I was first supposed to use her design, which I didn´t like. I am a great fan of Angela but this case was different. So I did a complete redesign, which I like a lot.

The film explains the mechanics of the regional parliament and is often used in schools. It is a pity, that I haven´t found another use for this style so far. By the way thanks to Annette Schneider of Taks Film and Dorothea Künzig for her advice….

I uploaded an edit of the animated scenes. I don´t have the sound files so they are without sound, but I hope you will get the idea.

These are some drawings from the first pitch and a link to the animation test I did back then. 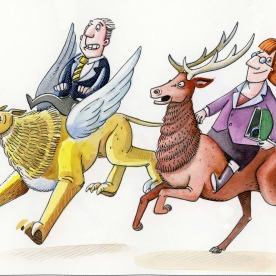